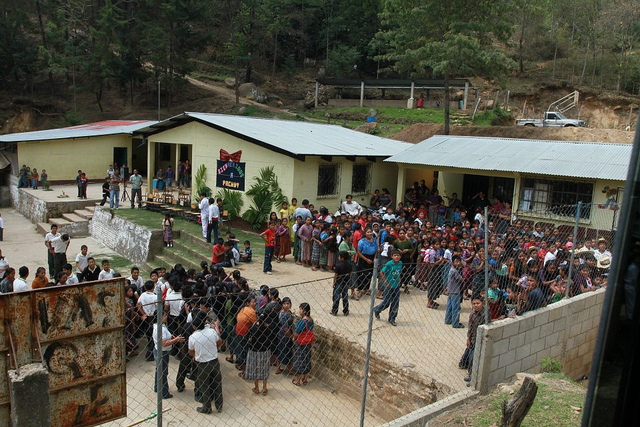 Pachay is located 8 miles away from the center of San Martin Jilotepeque. The word Pachay means “place of obsidians”. A lot of ancient Mayan sculptures and items have been found in this community which means this was a sacred place for this culture. There are 110 Mayan descendant families in the area and 80% speak the Mayan language, Kaqchiquel.

This school infrastructure project was accomplished by offsetting the funds provided by Hug It Forward and with the collaboration of the community members. The PTA worked jointly with students’ families in order to provide the manual labor for the project, as well as general coordination required for project implementation.

The school’s official name is “Rafael Alvarez Ovalle”, who is the author of Guatemala’s national anthem. The school is also the oldest of this province, having been founded about 125 years ago.

The inauguration coincided with a group of volunteers being present in San Martin as part of a voluntourism trip run by Serve The World Today. During the dedication ceremony, volunteers watched children put on traditional performances, and received gifts from community members as a mark of gratitude for their support. After the ribbons were cut to officially open the new classrooms, volunteers and community members danced together in joyful celebration.